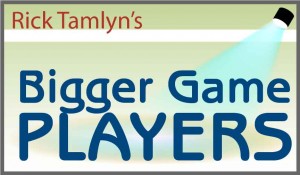 “I believe my gift is music. And it’s only a gift if I give it to someone.” These are the words of Paul Smith, an incredible soul that I’ve known for a number of years.

He’s a former band director turned business consultant who recently returned to his first love… music. His Bigger Game – The Starfish Flute Project – enriches children’s lives thru music. While playing his first gig at Cook Children’s Medical Center in Fort Worth, TX, Paul met the local Fox News anchor, who happened to be at the hospital for another story.

Next thing you know Paul is being interviewed and featured on the newscast as a Hometown Hero.

Here’s what I know… when you’re truly compelled by a desire to make a difference, you become capable of creating and achieving and attracting miraculous results. Paul Smith is such a great example of this!

Click here to watch Paul on Fox 4 Dallas/Fort Worth.

Click here to learn more about Paul’s Bigger Game in his own words.