Hungry for More in Your Life?

Have you ever found yourself standing in front of your refrigerator with the door open while thinking, I’m hungry. I just don’t know what I 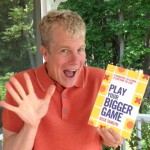 I’ll be in LA on Thursday night to officially launch my new book Play Your Bigger Game! It’s a party for sure, but more than that, I’ve created an evening that will be both fun and inspirational… one that will help point YOU in the direction of your bigger game.

If you are in LA, please join me at the NoHo Arts Center. We’ll also be doing a live webcast, so regardless of where you are in the world, please join in on the fun! The party starts at 7:00 pm PST/10:00 pm EST… to watch online, simply visit www.ricktamlyn.com.

I hope to see you there! Click here to learn more!

Alice Coles is a natural

I’ve talked about Alice Coles for over a decade in The Bigger Game workshop. She is an excellent example of what I call a “natural” bigger game player. Her story brings the Bigger Game Board to life! As many of you know, I had the pleasure to meet Alice in person at the Bigger Game Expo this past May.

Alice is pure inspiration! Expo attendees listened to her every word, and I was a bit star struck, to be honest! We’re working on an extended video clip of Alice and her work that we’ll debut next month, but in the short term, I just had to share a tiny clip of her talking about what it means to play a bigger game. What a great way to start a Monday morning!