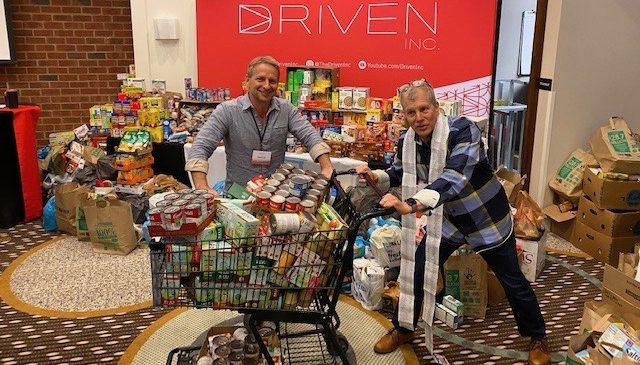 As you probably know, I wrote a book called Play Your Bigger Game.

I always love talking about my philosophy about what it means to Play Your Bigger Game when I’m training or keynoting, and up until this week, many of the concepts I usually talk about have been just that… concepts.

It’s one thing to know and understand the Bigger Game philosophy, and it’s an entirely different thing to actually live it and bring it to life.

And that’s exactly what happened to me just a few days ago.

Chuck and I were at a business building retreat, where we spent concentrated time working on our business. One day we were given a task that at first glance seemed ridiculous and impossible to achieve.

There were about 75 of us and we were broken into small groups and tasked with raising funds for TABLE, a local non-profit organization that brings food directly to local children in need.

The assignment was to set a goal, work as a team, and raise funds within a 3-hour period. And here’s the kicker… we couldn’t solicit to anyone in person and had to figure out ways to quickly raise money. The team with the most raised would win.

For our contribution, Chuck and I decided on two things:

To be honest, both of these ideas were out of our comfort zone, and yet with a very brief time limit, we decided to bite the bullet and go for it. This included figuring out quickly how to collect money and budget in enough time to get to the local grocery store and actually buy the groceries.

Wow – all of a sudden we were living and playing a Bigger Game, and we found ourselves all over the game board!

I’ve been journaling like crazy since we did this… the learning for me was off the charts. With that said, here are my top two take-aways:

I learned where I stop and more importantly, why I stop.

I love this Bigger Game concept, and I experienced it for real this week like never before. My team’s goal was to raise $5,000 in three-hours, and each time myself or someone on my team started freaking out about raising the money, it simply didn’t work.

The Bigger Game was to feed kids; the goal was an arbitrary number.  When we focused on the game (feeding the kids), it went way better.

I have always loved teaching this concept, yet I fail at living it in my daily life. One big afternoon in Chapel Hill, NC has changed that.

It’s fun to report that my team surpassed our goal and won the competition. Overall, our larger group raised over $20,000 total… TABLE was overwhelmed with our generosity, as we learned after the fact that they were having major issues with their normal food vendors due to challenges related to the coronavirus.

Related, I’m sending love, light and ease to our world as we all deal with this unknown coronavirus. I dare say that how we be with each other will be one of the key components to our level of recovery from it.

Have you had an instance where you focused on the game instead of the goal? I’d love to hear about it!